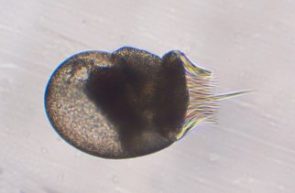 A great and long-awaited milestone for the Relife project has finally been reached: first Patella ferruginea post-larvae obtained!

Over the past few weeks, researchers from the DiSTAV of the University of Genoa, together with their colleague and expert Dr. Javier Guallart, have succeeded for the first time in achieving reproduction under controlled conditions and using non-invasive methods of Patella ferruginea, one of the largest existing limpets, endemic to the Mediterranean, once widespread, now at risk of extinction, so much so that it is considered the most endangered marine invertebrate in the whole basin and is a species protected by international conventions.

This year’s great success lies in the fact that we managed to induce, in a natural way, the emission of gametes from male and female specimens of this species. In nature, these gametes are released directly into the water, as is the case with most marine invertebrates, where fertilisation takes place, leading to the formation of a larva. This passes through different stages until it reaches the condition where it settles on the substrate and “transforms”, or rather metamorphoses, into what is known as the juvenile form, i.e. a tiny individual with the features of an adult.

The release occurred from 6 specimens, two males and four females, on three different occasions. The first fertilisation resulted in 780,000 fertilised eggs (from one female), the second in 250,000 eggs from another female, the third in 850,000 eggs from two females. For a total of 1,880,000 eggs.

What happen after the first days.

In the next phase, increasing the risk of mortality, counting is no longer carried out. The larval stage is observed by taking a sample of larvae that have hatched or, later, by observing the substrates where they have attached themselves.

The great achievement is not only the emission of gametes but also following (and documenting) the various larval stages (several hundred thousand larvae) up to the moment of settlement in these days.

Now we will wait a few months in the hope that they will survive the first few delicate weeks of life to a good extent. 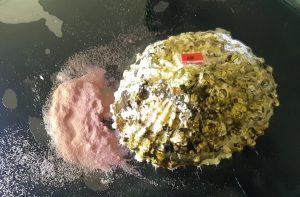 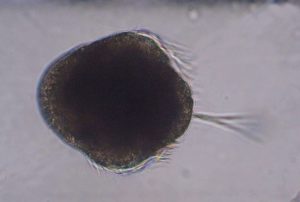 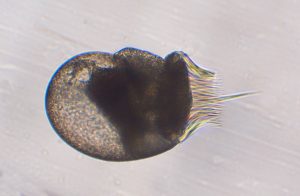 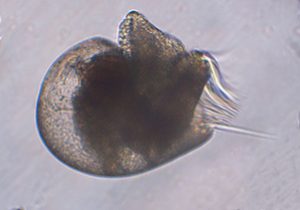 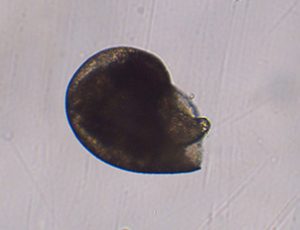 which soon has the ability to retract into the proto-shell 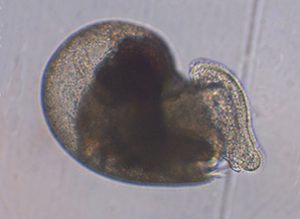 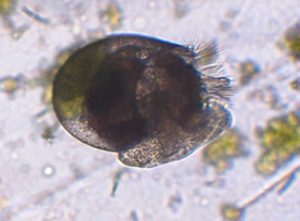 with which after a short time it can start crawling 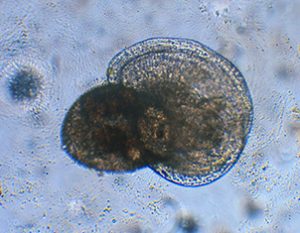 Finally, after about 10 days, the post-larvae have attached themselves to the substrate and begin to develop the final shell